Explosive documents just released in the court case against General Michael Flynn show that it was Joe Biden who proposed they set up the three star general to get him terminated or worse from the Trump Administration.

1. Joe Biden suggested the Obama Administration get Flynn on the pretext of the Logan Act
2. Former President Obama ordered that “the right people” be put on the case of General Flynn
3. Former FBI Chief Jim Comey said Flynn’s discussions with the Russian Ambassador “appear legit.”

In Other News: JOE BIDEN ABOUT TO FACE DEADLY QUESTIONS OVER FIRING OF UKRAINIAN PROSECUTOR

The Logan Act is an almost never used US law that prohibits private citizens from engaging in foreign policy. You know, like John Kerry has been doing with Iran to keep that despicable Iran deal afloat.

Here’s a closer look at the note put out by the Techno Fog Twitter account, which has leaked a lot of accurate information from this case.

Here’s a read out of the note in the apparent court documents. 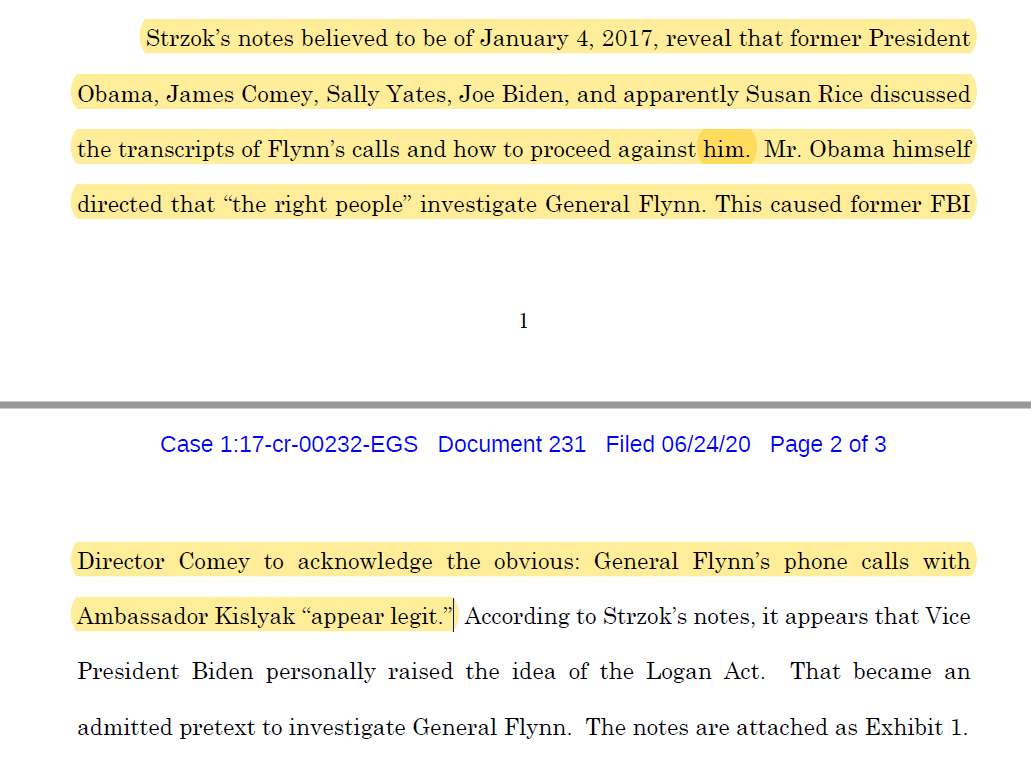 Former Acting Director of National Intelligence and former Ambassador to Germany, Richard Grenell says the note said more than that. He said that the documents also show that Susan Rice’s odd cover-your-ass email to herself in the last hours of the Obama Administration were phony.

In Other News: Obama Discovers that Joe Biden’s Candidacy Was a Grave Mistake

This is very troubling. The Susan Rice email to herself clearly didn’t give an accurate portrayal of the meeting. The “right people” is fundamentally different than “by the book”.

Imagine that, the investigation into Flynn’s “legit” discussions with Russian Ambassador Kislyak that was part of the Russia! Russia! Russia! scam is also a scam by the Obama Administration.

This election just keeps getting more interesting all the time.

George Floyd and Breonna Taylor, Chuck Schumer Struggles To Get These Names Right

What You Need To Know About “JOE BIDEN’S COGNITIVE TESTS”

This Trump Ad Could Mark The End Of Joe Biden

BIDEN NABBED! Confesses During Presser that ALL OF HIS QUESTIONS WERE PRE-PLANNED

Trump Uncovers the DARK SIDE Of Democratic Rule